The history of Pine Hill has to start with its benefactor, Dr. Harvey B. Bashore.

He was born on July 31, 1864 in West Fairview.  His father, Daniel W. Bashore was also a medical doctor.  The Beers map of 1872 places their home at the corner of Market and Main Street in West Fairview, which is currently the site of the Uni-Mart.  This remained the Bashore home until Harvey’s death in 1934.

Dr. Bashore graduated from the Harrisburg Academy in 1882 and from Yale in 1886.  He received his medical degree from the University of Pennsylvania.  He interned in one of the New York hospitals before coming back to West Fairview to begin practicing medicine.  He was a member of West Fairview’s borough council for years.

He wrote a number of books and articles on health, sanitation, and local history.  He was an authority on Indian lore and made a special study of the famous Indian trail, the Kittanning Trail.

Charles Sawyer, an octogenarian and lifetime resident of West Fairview remembers Harvey Bashore, “As a young student in West Fairview, I recall him giving us our hearing test.  He would whisper in each ear and ask us to repeat what he had said.  The kids would laugh because all the class could hear what he said.  Pine Hill was his pet project but he also had all kinds of flowers and things in his yard.  He had a big high fence around the yard and an old time barn in the back where he kept his horse and wagon.  We kids were not allowed in his yard, even when an occasional baseball went over his fence.  The barn was still there in 1940.”

Jennie Crumlic Bowersox and Russell Ready both tell us that Dr. Bashore delivered them – the cost, $3.00.

Perhaps it should come as no surprise that Dr. Bashore would look for and find property that represented his beliefs and ideals.

From 1903 to 1905 he purchased property from William and Fannie Fake, Charles and Annie Miller, and Edward Eslinger.  This fifteen acres became known as the Bashore Memorial and later, the Pine Hill Aboretum.  The acreage extends from the bank of the Conodoguinet Creek, across Creekside Drive and up the hill to Humer Street in East Pennsboro Township.

Dr. Bashore died at his home in West Fairview on November 28, 1934 at 70 years of age.  He never married.  He and his parents are interred at Zion Luthern Cemetery.  On February 25, 1935, Dr. Bashore’s sister, Mabel Bashore, deeded “Pine Hill to the Harrisburg Natural History Society.  His will provided $1,000 for “A trust fund to provide maintenance of Pine Hill Property as directed by Mabel Bashore”.

The Harrisburg Natural History Society was founded in 1904 and incorporated in 1934.  Mr. William Tripp, former President recounts, “it is my understanding that our Society started at a time when people would ride the street cars and then go for a walk.  This walking or nature group must have gone to Pine Hill.”  Mr. Robert Meckley, past president of the Society adds, “The Natural History Society used Pine Hill for meetings, picnics, and field trips.  At one time, the Society had six or seven hundred members.”

The Society sponsored many events in years past.  They had square dances, complete with an old windup phonograph player.  It was not unusual to see 100 people turn out for the traditional corn roast that was held on the first Saturday in August.  The Natural History Society held a Christmas bird count on Pine Hill.  Once member’s wife would cook pancakes using the old wood stove for the dozen or so participants who would brave the cold to be there.

As late as 1965, Pine Hill had a pavilion and cabin complete with a pot belly stove.  The cabin was at the top of the hill and faced the Conodoguinet Creek.  As you faced the cabin, the pavilion was on the left.  Many of the trees were identified with small name plates and markers were placed on the ground, honoring past board or Presidents of the Society.  There was an outdoor fireplace and hand pump for water.

Mr. Tripp states that, “Mr. Roy Darr, a long resident of Enola, was one of the caretakers and many times he would go there and just meditate; just enjoy himself.”

Pine Hill will always be special to the children that grew up in West Fairview, Possum Hollow, and Enola.  Perhaps it was the field trips with our teachers pointing out the many flowers and trees, or maybe just Pine Hill itself; the beauty and tranquility that Mr. Roy Darr experienced.  It too could have been our young minds that somehow envisioned the American Indian children that walked this small gorge before us.

About 1960, East Pennsboro Township decided to run a sewer line through the center of the Arboretum.  The Harrisburg Natural History Society hired an attorney and took the Township to court.  The argued and petitioned the Township to locate the sewer line west of Pine Hill; however, the Society lost the case.  Mr. Tripp said that, “I must say that the contractor did a wonderful job of avoiding every big tree that they could.  With the sewer going down the stream bed, naturally the rock base was destroyed and we no longer have that little stream that once flowed through the property.”

In 1993, the Harrisburg Natural History Society tore down the old cabin.  Also in 1993, Corbin Williams completed an FFA project; he surveyed, noted, and photographed 118 wildflowers in Pine Hill.  He also identified 29 trees, 5 ferns, and with help from the Natural History Society, identified 79 birds.  Corbin’s project won a State conservation award from the Department of Environmental Protection; it was also announced in the Game Commission News.

During 1998 and 1999, East Pennsboro Township made improvements to the end of Humer Street (the top of the Arboretum) and cleaned and made a small parking area on Creekside Drive at the bottom of the Arboretum.

On November 17, 2004, the Harrisburg Natural History Society deeded the property to the East Pennsboro Township.

Today visitors can still experience the beauty and tranquility of Pine Hill.  Parts of the old fireplace are still standing, as is the old pump. 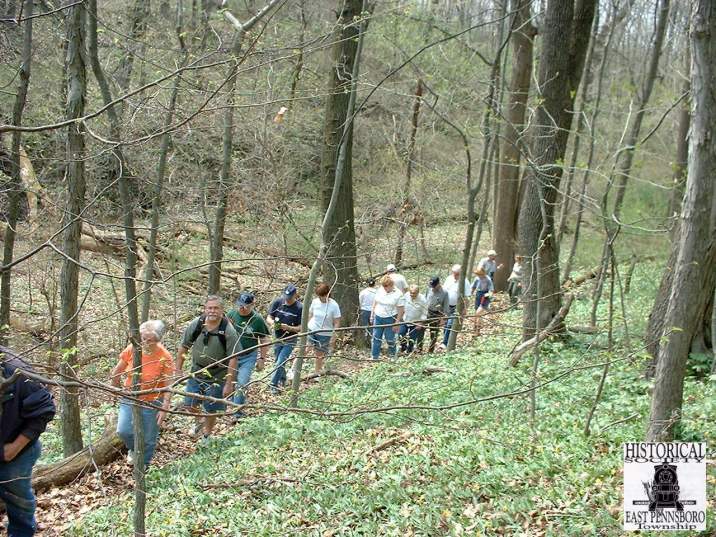